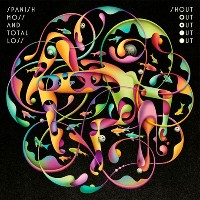 Shout Out Out Out Out are not a very aptly named band. They don't have howling vocals, yelping vocals or even real vocals. The main vocals are hidden behind a vocodor. Nevertheless one should not get hung up on such an intriguing bands odd name. Spanish Moss and Total Loss is Shout Out Out Out Out's third album and it is steeped in a analog synths, Krautrock sensibilities, double drummers and not-so-hidden melodies. The music of Spanish Moss and Total Loss seems to have been made for alien dance floors where everyone speaks through vocodors, or maybe for a dancehall in an east Berlin warehouse. This is exemplified in songs like “ Never the Same Way Twice” and “Lessons in Disappearing”, where the layered beats are powerful and infectious. Yet this Edmonton sextet is strongest when it lets it melancholic melodies shine through the haze of drums and synthesizers to create wonderfully strange sad pop songs, like “Wayward Satellite”