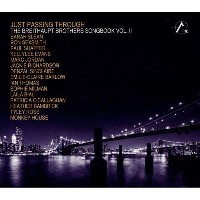 The work of Jeff and Don Breithaupt captured on Just Passing Through, shines the musical theatre stage lights far north, beyond the 49th parallel. Sure, the UK has Gilbert and Sullivan, who brought the world The Pirates of Penzance. The Brits also claim composer Andrew Lloyd Webber who helped craft Evita, Cats along with Joesph and the Amazing Technicolour Dreamcoat. As for the USA, they’ve got Rodgers and Hammerstein, who delighted audiences with Oklahoma!, The King and I and The Sound of Music. But with the Breithaupt brothers’ new ALMA Records release, they show musical theatre can originate away from London’s West End and Broadway in New York City. Sharing the task of song writing, Jeff crafts lyrics and Don fashions the music. Throughout the album, the pair stays comfortably within the boundaries of the show tune form. The 15 songs don’t innovate; instead they savour and stretch out within musical theatre. The model melodies are matched note-for-note with witty tongue-in-cheek lyrics like in the song “Bad Influence” performed by Paul Shaffer (of Late Show with David Letterman-fame). Singing about his love interest, Paul laments that “you've got me home each night by 10; drinking tea, instead of scotch...Baby you're a bad influence." As an added flourish, the album is lined with Canadian music celebs including Ron Sexsmith, Sarah Slean and Sophie Milman. The album is the realization of a modern Canadian songbook; a recording fit for musical theatre fans and vocal jazz devotees.