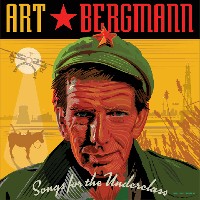 Songs For the Underclass
Weewerk ( http://www.weewerk.com )

The essence of punk resonates with that of folk --- DIY, activist and subversive. There’s a well-worn path between punk rock and folk music. Joe Strummer went from The Clash to solo releases laced with folk, as did Billy Bragg and Jr. Gone Wild's Mike McDonald. Art Bergmann is charting a similar course with his EP, Songs for the Underclass. Not in a predictable, unoriginal kind of way, but a logical one. Art's trajectory from punk to folk began in Vancouver, back in the 1970s. That's when Art played in different groups; fronting the band, Young Canadians. Since then he released his John Cale-produced debut solo album, signed with Polygram Records, moved over to Sony and won a Juno award for Best Alternative Rock Album with his 1995 effort, What Fresh Hell Is This?. Which brings us to 2014 and his independent four-song release on Weewerk; his first new material since the 1990s. The handful of songs, produced by Calgary’s Lorrie Matheson, has the piss and vinegar of punk, filtered through social commentary of folk. There are lyrics about drones, revolution and hypocrisy but there's a definite standout song, Company Store (one that if punk or folk musicians gave a damn about it, would be the buzz track). It’s the track that fully realizes and best articulates the anti-establishment stance that both his beginnings in punk and current situation in folk are built upon --- compelling you to tap your toe and shake your fist.