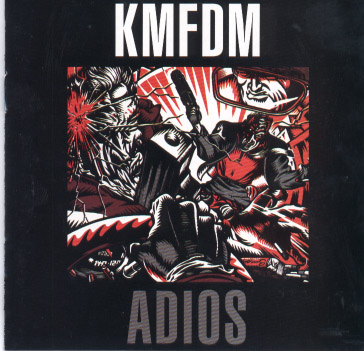 I wasn't quite sure what to expect when I heard KMFDM was packing it in after their final release, Adios. I've only been somewhat familiar with their music over the years (their song "A Drug Against War" always stood out to me), but it seems that what I always enjoyed best was their heavier industrial edge. I realize they've also equally capitalized on their more danceable material, but that never really caught me in the right light. Regardless, I expected Adios to provide KMFDM with a big sendoff, kinda like being shot out of a circus cannon. Sorry to report that it didn't work out that way, as they forgot to pack the gunpowder tight enough. Actually, things start out not too badly with the title track, but mediocrity seems to set in with track two, "Sycophant", and never goes away. The third track, "D.I.Y." is probably the heaviest cut on the album, but it may as well be called "A Drug Against War - Reprise", seeing as that's exactly what it sounds like. The remainder of the album serves up a bunch of mid-tempo, equally boring tunes that never really seem to grab your attention. At least halfway through the latter half of the album the listener is treated with a tune they might actually want to sing along to in "That's All". But, given what we have on Adios, I'd say I'm pretty happy to learn that's all I'll be hearing from KMFDM for a long time to come. Recommended Tracks: Adios, That's All, D.I.Y