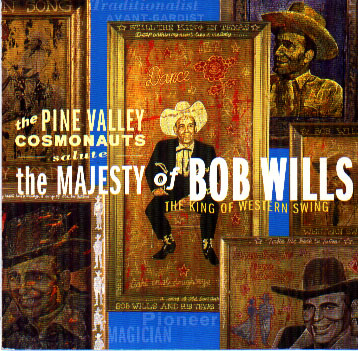 At first glance this record could be passed off as another in a long line of recent alt-country records. Not that there is anything wrong with new bands playing traditional country tunes but, like all musical genres, this can get old fairly quickly. With this tribute to Bob Wills, the Pine Valley Cosmonauts leave much of today's alt-country bands (and all new country bands) eating dust. Bob Wills played a style of music which, although it may sound familiar today, was unheard of in the 1920s-40s. Playing jazz, swing and blues, he added fiddles, steel guitars and the heartfelt lyrics of country-western music. Drums were unheard of on the Grand Ole Opry until Bob Wills appeared, and his view that he was more a jazz and blues man than a country-western artist further separated him from country music's mainstream. Jon Langford saw a need for Wills' music to reach a whole new generation of people and assembled fellow members of the Waco Brothers, a member of the Bottle Rockets, Poi Dog Pondering on horns and John Rice on fiddle, guitar, mandolin and banjo. Brett Sparks of the Handsome Family, Alejandro Escovedo, Neko Case and many others fill in on lead vocals. Mixing up the male vocalists with female vocalists, whom Wills never used, and some instrumental tracks, they cover 19 tunes in all and every single one is worth a close listen to. If you're either a fan of swing but hate what passes for it today or a fan of good old country and western music, the Pine Valley Cosmonauts salute to Bob Wills is a must have.