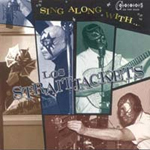 Sing Along With Los Straitjackets
Cavalcade ( )

Bringing in a nearly a dozen different singers, Los Straitjackets have compiled an interesting set of covers songs, ranging the length and breadth of the musical spectrum. Musical selections from Roy Orbison, Los Bravos and Skeeter Davis are redone with the likes of Raul Malo (the Mavericks), Leigh Nash (Sixpence None the Richer), and Reverend Horton Heat at the helm. From Brit-pop to straight up rock and plenty in between, this 34-minute album is the musical equivalent of a trip to a country fair a myriad of swirling sights and sounds and smells, overwhelming the senses.

Of course, these same strengths serve to work against the band, relegating them to the status of backing band. The vocalists are thrust squarely into the spotlight on this album and rightly so but all the same it is mildly disappointing. The Straitjackets play it straight up, with little deviation from what must have been each tracks original arrangement. They're tight without question, but nobody pays just to hear how closely someone can mimic an original. That would be akin to completing a paint-by-numbers and foisting it up as the Mona Lisa. A fine recording, but I doubt it will do much to further the Straitjackets' career.

RECOMMENDED TRACKS: Black Is Black, Down The Line, Shake That Rat