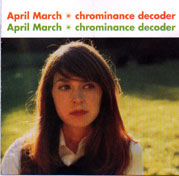 April March is a remarkable character, and after spending years in kitchy obscurity it's about time that America's little French ingenue put out an album truly worthy of her charm. Born Elinor Blake, Ms. March has collaborated with everyone from Brian Wilson to garage rockers the Makers, as well as releasing a handful of french pop albums celebrating the cult of Serge Gainsbourg, all while holding down a day job as an animator for the Ren and Stimpy show. This time around her svengali is Bertrand Burgalat, who produced, arranged, and recorded Chrominance Decoder, as well as having written and performed the instrumentation on nearly every song. The best songs on Chrominance Decoder are those on which Burgalat takes his cues from other international pop artists like Fantastic Plastic Machine and Arling and Cameron and mixes his Gainsbourg inspired pop songs with trip-hop beats and electronic bossa nova. On tracks like "Sugar," and "Garcon Glacon," April trades in her patented little girl vocals for a more mature, sultry sound. Whether she's singing in English or French, she evokes a tres chic beatnik feel: full of imaginary references to black berets, coffee houses, and Audrey Hepburn circa Breakfast at Tiffany's. Chromincance Decoder's downfall is the inclusion of April's playfull sing-a-longs. While she charmed everyone years ago with her kitschy romp "Stay Away From Robert Mitchem," after a couple minutes, the candy-coated go-go girl act wears mighty thin. Tracks like "Mignonette" and "Mon Petit Ami" have April sounding more like CBC's bizarre pink francaphone cartoon character the Studio Coquette than the luscious chanteuse that dominates the rest of the album. Luckily, these songs are fairly easy to ignore. Rounded off by a couple of great Dust Brothers' remixes, on the whole Chrominance Decoder could very well be April March's breakthrough album, if she would only trim off the fluff. Recommended tracks: "Sugar," "Garcon Glacon," "Knee Socks."