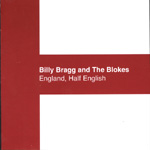 Billy Bragg and the Blokes ( )

I could try and understand all the political views and ideals that Billy Bragg has and uses in his music, but it would probably take me a year or more of studying British policy and even then I would still be guessing. I don't have a clue why he's so mad as hell or what exactly it is he's pissed at. I do know that when he says "Take down the Union Jack/It clashes with the sunset/And put it in the attic with the emperor's clothes," we can infer that he's not too happy with the good ol' British Empire. I think the entire essence of the lyrics on England, Half English is just that; jolly old England ain't so jolly. If you take away all the jargon and just put the disc in your CD player, chances are you'll find a disc that you continually go back to just for the toe-tapping amusement. The downfall of England, Half English is that it suffers from some of the same inconsistencies that most political albums do; that being the words are more important than the music. It appears at times that the musical direction is cut short for the sake of making sure the words are heard loud and clear. Admittedly, that's not the case throughout the disc, as songs like "Some Days I See The Point", or "Distant Shore" do allow you to get lost in the tune. The one song on the disc that I keep skipping over is "Baby Faroukh". There is just something aggravating about this one, it may be the fact that he's trying to mix a steel guitar with some Asian instruments like the saz and the darabouka, but I don't know exactly. This is the first album of original material for Bragg since 1996 so you would think he'd have a lot of solid substance for the record and he overall he does. It's not as good as his collaborations with Wilco on the Mermaid Avenue discs but really what has been. RECOMMENDED TRACKS: "England Half English", "Some Days I See The Point", "Take Down The Union Jack" - Matt Holmes, CIOI Radio, Hamilton, ON

More Reviews For Outside Music artists