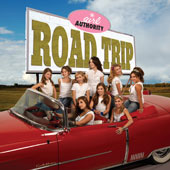 When I first heard the premise of the latest album from Boston's Girl Authority I was somewhat intrigued. A group of nine girls aged 9 to 14 and their take on their favourite pop tunes had potential. I had recently discovered the latest Roots Music record which featured a large group of 9 year olds screaming "Sponge Bob!!! Square pants!!!" and hoped for something along those same lines with this release. Sadly, I couldn't have been more wrong. Road Trip is 100% pure tween pop. It lacks any of the childish charm that I was expecting to hear. Instead, I was bombarded with track after track of tweens rehashing tunes like Madonna's "Holiday", Tom Cochrane's "Life is a Highway" or Fleetwood Mac's "Don't Stop" and ended up being less than impressed. Rather than taking these popular songs and reworking them with a child-like wit, Girl Authority (well, in actual fact it was probably their manager Michael Pagnotta of Reach Media) simply re-do the tunes as closely to the original as possible. In short, Girl Authority is of a completely different species than the Roots Music record or The Langley Schools Music program. Where the latter two want to celebrate the beauty of children's music, Girl Authority seems more focused on masking the fact that these musicians are in fact still children. They want to come across as adult-like as possible, dressing up as their favourite pop stars, and singing in such a way where the word 'child' is hardly apt. The end result is an underwhelming record that clearly wants tweens to rid themselves of any child-like qualities.