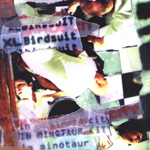 XL Birdsuit's debut album kicks ass, and is hands down, the most fun I have had listening to an album with distorted guitars in it since, oh, maybe 1999. In Minotaur City falls into the post-punk category which I suppose makes sense, though a lot of the punk influence is missing, in my opinion (or maybe punk has just gotten soft?), replaced instead with a strange sort of poppy Sonic Youth-esque discordance mixed with serious straight-ahead indie/pop rock. However, it's just raunchy enough to make mothers utter, "If I was one of these kid's parents, I'd kill myself." At least that's what my mom said. The first standout track on this release is the second one in, entitled "Spk'd." While a little mellower than most other tracks on the album, it highlights the great vocal work that appears throughout. And while the lyrics remain a complete mystery to me ("No really, how small can you get it?/Leg trap or hunting net/In the temple of Set/Are the steaks rat or snake/Making all the vinyl upset..."), I still find myself singing them at odd times during the day. The track right after is another stunningly good song called "Girls Fight," where we see the keyboards enter the scene and increase the general jump-around-ness of the songs. It also showcases a more humorous side of the album with lyrics like "More gloss than you could take a shine to," and "Pigtail on pigtail on pig." Finally, the eighth track, which goes by the name of "Japanese Scales," tops this album off for me. The quietest song on the album, "Japanese Scales" is a beautiful, slow, moody piece. XL Birdsuit show that they can really create ambience and feeling, not just kicking loud songs, and on this track, using barre chords on the bass accompanied by strangely out of tune vocals fit the song perfectly. In Minotaur City is an album that has a really great new sound all the way through. This is definitely a band with a lot of talent for both songwriting and production, and with another CD due out this fall, XL Birdsuit may very well receive some deserved attention in the near future. RECOMMENDED TRACKS: "Spk'd", "Girls Fight", "Japanese Scales"