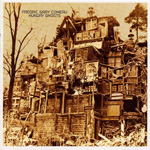 On Hungry Ghosts Fredric Gary Comeau takes the listener on a journey around the globe. His music tells of his experiences while traveling from his home in "La Belle Province" to places of all kinds. Wherever he goes, though, he is unable to escape what haunts him and memories of the past permeate his work. "Humble Abode" finds him journeying along a lonely highway in southern Texas as night falls, yearning for his simple abode back on the east coast. His voice is reminiscent of Leonard Cohen; soothing yet somehow strained. There is also a Lou Reed laziness in his vocal style. Comeau is not in any kind of a hurry, as is evident in hearing his music meander through the landscapes he visits. He is not a happy traveler, bogged down with beach balls and baseball gloves. Instead, Comeau is encumbered by the ghosts of his past, and lost love is perhaps the chief of all ghosts. On "Don't Kill the Messenger," he awakes from a night of drinking to reflect on how he has been "forsaken by love." Ironically, even though he travels about, he is unable to move past the pain he feels. So here he sits, in some hotel, feeling sorry for himself. Comeau likes to partake in a little liquid pacification in order to escape the painful ghosts that cavort in the halls of his mind. So, while he reports his experiences from places like Mexico and Turkey, one quickly gets the impression that he needn't have gone anywhere. The experiences are drowned in ounce after ounce of 'giggle juice.' As listeners we are reminded over and over about his personal struggle. Only, we soon have to wonder; is he wrestling with his heart's desires, or his affinity for alcohol? It is difficult to take him very seriously after a while. Hungry Ghosts is more thirsty than anything, as can be witnessed in the poetics of "Drowning" and the obligatory, "Drink." Overall, this collection of tracks is a bit numbing to the mind. Subject matter aside, this is something of a poor man's Leonard Cohen. One might envision a small Texas town, dusty and forgotten, where everybody seems like lifeless cardboard cutouts. If you like cardboard-aesthetically speaking-then you'll appreciate this album. Unfortunately, while there are moments of decency, Comeau's efforts fall face-first in the dust. RECOMMENDED TRACKS: "Humble Abode", "Rainy Day in Istanbul" - Matthew Kay-Lassels, CJSR Radio, Edmonton, AB