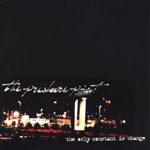 The Only Constant is Change
Farway ( )

When I got The Only Constant is Change, the first thing I did was put it in my portable CD player and hop on my bike. This was a big mistake. There are some albums that if you listen to them in your car, you drive really fast and get a speeding ticket. This is one of those albums, and after biking really fast for almost half an hour, my tiny musician legs felt like they were going to fall off. For anyone who regularly goes to punk shows in Edmonton, The Preshure Point are the band that sticks out as simply being a whole lot better than everyone else. Their set usually makes having stood through the first ten bands worthwhile. The first thing that I noticed about seeing them live was how amazingly tight they were, and The Only Constant is Change captures this tightness. Not only are the band members locked in with one another, but the songs themselves are cohesive and arranged really well. They manage to fit in a lot of ideas in every song, but at the same time the songs make sense and don't come across as disjointed. A lot of times when bands try to write as many different parts into their songs as The Preshure Point do, the songs lose any direction and just don't work. In this case however, the songs progress logically and are easy to listen to. As a result, they almost sounds like a prog-rock band, and The Only Constant is Change has a few Dream Theater-esque moments, but at the same time it feels like a punk album. All of the heavy and fast sections are very heavy and fast, and the slower sections are spacey and really cool sounding, and since the transitions are perfect, this album is just plain good. RECOMMENDED TRACKS: "Seventh Day", "From Here On In"