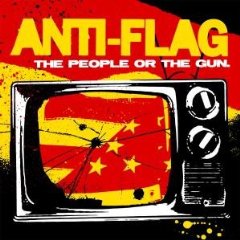 The People Or The Gun
SideOneDummy ( http://www.sideonedummy.com/ )

I feel I should state my bias off the top. I used to like this band when I was 17, but then 12 years have past, and I have since outgrew them. Looking back at their older records, I can understand what was appealing about them, but it has no affect on me any longer. To those who may have never heard an Anti-Flag record, you are missing some generic sounding punk rock, with well intentioned, but sadly, flat political lyrics.
The band has recently released their 10th album, called The People Or The Gun. When I learned I would be reviewing their latest offering, I was excited about the chance. I figured either they would have recorded something that would win me back, or I would have a good time tearing them a new one. Sadly, neither has happened.
In regards to the music, Anti Flag has not changed much throughout the years. They have never been the most adventurous band, which could explain why most of their fanbase can’t buy beer. They have always seemed like a political band, who never quite understand the subtlety or nuances of the system they so vocally oppose. Take a song like “The Economy Is Suffering... Let It Die”, which as it sounds, is the bands rally call about the current economic state. In it, lead singer Justin Sane sings the line “I’ve seen a lot of bailouts in my life. But where are the bailouts for the homeless and the poor?” And while I initially agree with their sentiment, I realize that globally, these companies are receiving Government funds because without them, they would have to close up shop, thus creating millions more unemployed. So while they argue about the fact that the poor get a rough shake (something I firmly believe in), their suggestion would only compound the issue.
Later in the same song they sing “When the cities burn down, we will all keep warm.”, which seems terribly ironic coming from a band who just came off of a two record contract with RCA records, one of the biggest music companies on Earth. The major issue with this album, and every record this band has ever released is that they don’t seem to be coming from honest places. They are using their beliefs to make some cash, which is hardly a bad thing, but when a band like Fugazi sing “You are not what you own” from their classic song “Merchandise”, it is coming from a much more honest place. They never jumped the righteous ship for more exposure. They stayed the course, and are a much better band for it.
I can’t say I hate this band, or this record. Politically, I believe in a lot of the same things they do. I love punk rock. It is in my blood, and I will never change. I can say that Anti Flag need to write songs that are not so simple. They offer complaints, but no suggestions. When they smash the state, they don’t seem to have much of a plan to get things working again, and that is a scary thought.