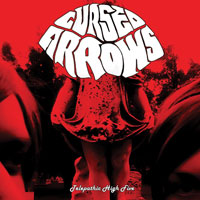 I am not a minimalist.
I can't look at a plate of food consisting of two crackers, a piece of cheese and a shaving of lettuce and call it a sandwich. It's just not me.
I can't listen to a band that doesn't have a guitarist and not think about what the mix would be like if it was there.
I guess this could be the reason I have always had difficulties really enjoying the ever popular two-person band dynamic. Don't misunderstand, I think it can work well, as is the case with bands like The White Stripes, or The Handsome Furs, but for every one gets it right, there are a dozen bands that just sound flat without the combination of a drum, a bass and a guitar.
Waterloo, ON band Cursed Arrows is a two piece band and I will be honest, upon opening up the envelope containing their second release Telepathic High Five I was a little let down. The only two pieces I like are either extremely well produced blues or contain a drum machine to pick up the slack. Reading their bio names like Nirvana, The Pixies, Pavement and The Melvins were name dropped. Quite the list to include in your bio, and while they themselves did not draw these connections, the comparisons were made never-the-less. By the time I had reached out and pressed play, I am not sure what I had built this band up to sound like. I was certain that I would not like them. I had built the two member's up to a couple of pretentious, minimalist rock-snobs with a Cobain fetish.
My brain likes to play tricks like this all the time. It just loves to independently form opinions on things, without any basis or merit. Logic would dictate that I would listen to a band before dismissing them totally, but some days, I just can't.
It was around this point that I started the lead-off track "Run Forever". The drums kicked in and I suddenly realized how wrong I was. The music was good. Really good actually. It didn't feel like a chore listening to it at all.
I really, really wanted to find a fault. It is always so easy to do with a two-piece band. Most of the time the songs are lacking something, and more often then not, it is the lack of a bass guitar. Bass drums can only do so much. Cused Arrows have made up for that with a really interesting drum mix. Tons or high hat and snare to push up the treble, and god, do I love treble.
Some of the songs tended to get a little too jammy for my taste. I think songs like "Earthlings" and "Chop You Up" were more enjoyable due to their brevity, but I also think that The Ramones perfected rock & roll and that Phish should have been battered and deep-fried, so clearly, I am biased.

In the end, they had won me over.  Telepathic High Fiveisn't going to go down as the next Repeater, but on its own merits, it is a great little record.