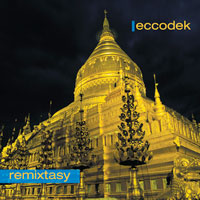 This 14-track album is produced by Canadian Andrew McPherson; this includes finding all the remixers for his electronic downtempo global fusion album, Remixtasy. He was inspired by his decade long career creating electronic music with global undertones. His three-album career attracted producers from wide ranging stances in the electronica music field. Andrew remixes two previous tracks of his own on this retrospective, and invites “Behind the Mask” 's Jef Stott (Six Degrees)to create the “Embarka Mix", an Turkish influenced Globalbass groove reminiscent of Photek's "Rings Around Saturn" and/or Talvin Singh's,Sounds of the Asian Underground. Eccodek is a Juno Award nominee, and winner of two Canadian Music Awards. The 14 songs are relaxing yet an exciting listen, with remixing and production on some tracks deserving more accolades than others. The global electronica samples are exemplary in choice of character and origin, and overall all tracks are beautifully fused sonorous travels. Remixtasy is a surprisingly refreshing album that finds a cooperation between artists transcending boundaries and barriers in fusion electronica, with adept style. A must have from the 2011 "Best of Canadian Electronica" category.