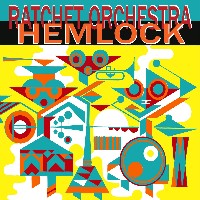 Montréal’s Ratchet Orchestra are truly a thing to behold. A veritable riot of instruments, spewing sound and melody from all directions. On Hemlock, the 30 something strong orchestra is captured magnificently, in gorgeous detail with flourishes and flaws fully intact.
The whirlwind of jazzy chaos gets started slowly. “Winnow” opens with an unassuming series of rising tones before a decidedly noir horn begins to cry out above the plodding backdrop. As more soloists begin to vie for prominence, the piece teeters on the edge of absurdity, seemingly just inches from losing all cohesiveness. But suddenly, the group returns to the opening motif in a dramatic display of ensemble virtuosity.
The aural palette created by such a large ensemble is truly a joy to experience. Both on Hemlock and on stage, I find myself constantly questioning where tones are coming from, and wondering where the next flourish will come from.
Throughout the record, the group veer from chilled out lounge jazz to a full on noisey sonic assault. The amazing part, however, is not the diversity of the sounds, but the flow with which they are moved through. Changeups are frequent and often unexpected, but at all times feel purposeful and calculated. Just as a tune gets tired, focus shifts and whole new landscape is revealed. Just as the screaming of horns, drums and strings reaches it’s most fever pitch, a new melody emerges from the din and pulls the entire tonal armada along with it.
Band Director Nicolas Caloia steers his crew with a deft hand, keeping momentum throughout the madness, and allowing the laundry list of Montréal’s most notorious improvisors to do their thing.