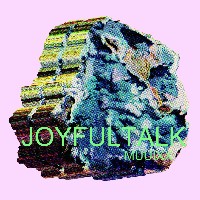 When Jay Crocker moved on from the Calgary music scene, Halifax gained an new distinctive musical character to add to their burgeoning list of talent. With projects like Ghostkeeper, No More Shapes, and The Electric Apes attached to his name, and a handful of experimental pop, rock, and drone albums released under his own, Crocker has built on this tradition of experimentation, improvisation, and newness with each successive project and album. His latest falls under the guise of Joyfultalk, a playfully optimistic title for some equally light electronic work, in which he seems to employ whomever he can find to conjure up the necessary skills his sound machines require.

MUUIXX is a deceptively simple album, full of textural sweeps, subtle ambiance, and circular melodies drawing from minimalism, all pouring out of handmade instruments made from the circuitry of modified controllers and altered synthesizers. Think of childhood memories of a Fisher Price toy keyboard with low batteries supplanted by the Vanilla Dome cave drums underneath excerpts of the soundtrack to Akira. Tampering with these have provided a unique palate of sounds that make up the backbone of Joyfultalk. Musically, their combination fits in near fellow-Halifax locals, Organ Magic, the first Fuck Buttons release, or other electronic pop minimalists like Chessie, Foehn, and Füxa.

Considering Crocker’s history in jazz, there are some additional complexities that become apparent as well, and whether these appear in the perfection of faint rhythmic and tonal imperfections or loudly indistinct muted vocal samples, there’s enough variety of noise, drone, chiptune, and avant-hiphop beats to examine over a number of listens. With this release, the only album outside an even noisier 20-minute experimental cassette, Joyfultalk are doing a fine job of odd-ball dance music for a Nova Scotia scene that most certainly should be able to appreciate them.