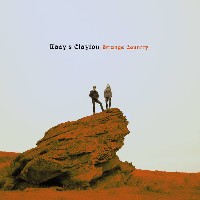 It may become quickly redundant to point out how old this album sounds. In fact, it is slightly strenuous to believe that artists, Clayton Linthicum and Kacy Anderson, have NOT simply uncovered and re-released some 1968 album of British folk with touches of country and western. To believe that the duo have created the most unbelievably authentic 60s-sounding record possible is much more of a stretch. Everything about their album, Strange Country, rings vintage. Utilizing the sounds of Fairport Convention and Clayton’s own band, Deep Dark Woods themselves, the production by Shuyler Jansen, an on-going collaborator with Ryan Boldt and the rest of Deep Dark Woods on top of being a solo artist and member of Old Reliable, features tinny guitar twang, subdued bass and drums, and warbled vibrato-voiced lyrics about classic Western locales, El Paso, Juarez, Monterrey, and Boston town.

There are a number of guitar playing conventions that mimic classic techniques --slow guitar pick-sweeps and hard plucks. The opening strums of the album’s title track, could come directly from Nick Drake’s Bryter Later, while the smart progression of “Springtime of the Year” could be quoted from a Joni Mitchell number. Lyrically, the album is quite full as well with multiple verses for each chorus, poetic Canadiana and Americana allusions to barren prairies, deserts, and autumn seasons. The three re-arranged traditionals, “Seven Yellow Gypsies,” “Over the River Charlie,” and “Plains of Mexico” fit so well amongst the rest of the tracks that it comes as a tiny surprise that these are not originals. Finally though, it is the production that really causes all this to stand out. Most certainly recorded to tape via ribbon microphones and put through some old compressors, Jansen brings out the best sounds of the late-60s despite reportedly recording the band in a living room and Kacy’s vocals in a bathroom. Many contemporary artists are able to do one or two of these things well enough, but the way that every aspect of Strange Country recalls the best of the past, makes this album notable as one of the best of its year.