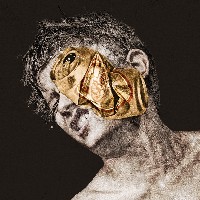 Sofy Major are a 3-piece band of riffy noisy rock and sludgy distortion. They come from Clermont-Ferrand, France, a place potentially famous abroad for little more than Blaise Pascal, Audrey Tautou, and Michelin tires. Their third full-length release, Waste, is mixed by famed producer, Andrew Schneider of Slughog, and cleanly produced by Dave Curran of noise rock pioneers Unsane. Sofy Major’s admiration of this New York legend certainly shows. It’s quite clear that the music they write has been well-informed by listening to Total Destruction, Fu Manchu, and High on Fire. While not as speedy as these nor technical-minded on the fretboards as others in the stoner metal domain, they make a case for the slow burn of simple hardcore structures with powerful simple melodic lines. The standout is the big distortion. With an extremely fuzzy bass guitar tone, cleanly distorted guitar, and a finishing touch of drive on the vocals to match. The drums have a huge sound, as if your ear is right up against them in a giant hall.

Most songs on Waste display extensively catchy hard rock riffs, boomy drums and singable choruses. The lyrics are in English despite their French origin, but don’t appear to contain considerable depth, although their delivery of rough bellowing Harvey Milk-shouts perfectly fit against the rest of the heavy instruments. The bass line regularly maintains the riffs while the guitar plays an complimentary octave and the odd mess of noodling lead guitar noise is a welcome switch from the guitar part mimicry. The final track contains a sound distinct from the rest of the album. With clean baritone vocals, Sofy Major cover “As Happy As Possible,” by one of the better known French punk bands, Les Thugs, who gained considerable North American following a trio of 90s releases via Sub-Pop. The vocals would seem more fitting if they were produced by a member of Les Thugs as guest on the recording. Nevertheless, a great release of boomy alternative-metal on the Solar Flare Record label.