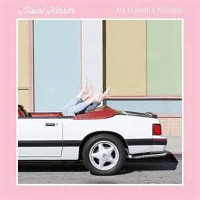 Miami Horror, an Australian act from Melbourne, made nthier name after landing a song on an installment of Grand Theft Auto. My first impressions of this latest release, All Possible Futures, had me impressed by extremely clear production, clean spacious vocals, and a summertime festival sound. But his initial impression faded by the third or fourth song, opening up a less interesting backstory. The album is just what one might expect to hear on a TV show where popular teenagers learn how to party at a pool. It easily allows the mind to visualize fluorescent sunglasses, bikinis, and boardshorts, performing choreographed dance moves in the shallow end.

In case their lyrics were overly complex, they are provided in the CD booklet and most songs consist of a mere three or four lines repeated endlessly throughout each song to similar effect. The fact that there are rarely breaks in the vocal lines, add to the notion that you’re hearing a soundtrack to a musical.

All Possible Futures has tapped into some of the paths that electronic acts like Chromeo and fellow Australians, Cut Copy, have carved out for themselves. Their songs are catchy and pleasant, but lackluster when compared to Chromeo's smart comedic lyrical depth that charges their smarmy 80s synths or Cut Copy's additional creative edge that especially emerges in their transitions between songs. It is also easy to hear Miami Horror’s blatant Prince, Michael Jackson, and Daft Punk influences, however, the songs’ formulaic structures, unwavering sound palettes, and simplistic lyrics make little distinction from song to song. The monotony aside, there's little wrong with this album. Still, in case the analogy has never been made before, 62-minutes of bubble gum pop is sure to have little flavour left by the end, leaving you with sore jaw muscles and the need for the bottom of a table.