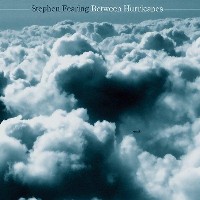 I first heard Stephen Fearing in 2006 after the release of Yellowjacket.  Apart from his ability to create images with words and music, the timbre of his voice was captivating. It took him 7 years to follow up with a new album entitled, Between Hurricanes.  That’s not to say he hasn’t been productive during that time span.  The Juno-winning singer-songwriter is also a member of Blackie and the Rodeo Kings as well as Fearing & White.

After seven years, I wondered what Mr. Fearing would have on the menu for us and whether his approach or perspective changed. Turns out he’s been through quite a bit. He has since been divorced, remarried, become a father, and has switched both record labels and managers!

If I may be so bold, Stephen Fearing strikes me as a Bruce Cockburn with a hangover. He is rugged, edgy, unapologetic all the while tender, intuitive, and genuine.

Fearing’s vocals are soothing and rhythmic yet at times aggressive and highly emotive.  Produced and mastered by John Whynot (Blue Rodeo, Lucinda Williams), the recording's emphasis is placed on Fearing’s hypnotizing intonation and inflection. The stripped down production of Between Hurricanes creates an atmospheric dissonance with the subject of his prose. There is no denying that it is compelling storytelling. Compositions touch on familiar topics ranging from childhood to old age, love and loss and foolish hearts. The central piece to this disc is "Cold Dawn,” an ode to the victims of a Cougar helicopter crash in Newfoundland in 2009 that killed seventeen people and left one sole survivor. Stephen Fearing tells the stories of the people that surround us. Just to be sure listeners don’t miss his roots, the disc concludes with a cover of Gordon Lightfoot’s "Early Morning Rain". This is pure Canadiana, through and through.