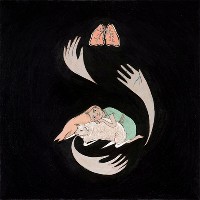 Two unusual things happened after I received the new Purity Ring CD to review. I listened to the disc, as always, in my car immersed in the full experience away from other distractions (apart from a few traffic lights and J-walkers). Late that night, I awoke with a Purity Ring earworm in my head. Swear-to-God !  The otherworldly track “Fineshrine” had set up residency in my brain. This seemed odd from a quirky little disc featuring a tender weave of electro-trip-hop chill –  but impressive none-the-less. A few days later, my besty used my car, with the disc still loaded. Being an electro-chill-music fan, he loved it immediately noting that he’d heard the lead track on our favorite Sunday afternoon digital chill channel. Was it so hard to believe that this high-rotation CD could be the product of a very young Canadian duo?

Ethereal and lush in texture, Shrines, is the first progeny of a pair of Canadians, Corin Roddick (21) and Megan James (24) known as Purity Ring. The name signifying a vow to virginity until marriage, similar to a chastity or promise ring, reflects their Christian values, and may explain the unnerving dichotomy of their sound, simultaneously mature yet child-like. What began as an experiment with Corin constructing a digital mix of back beats and rhythms from bits and pieces of R&B and hip hop influences, quickly turned into a full on project for the pair of musicians hailing from the DIY scene in Edmonton, Alberta. Unexpectedly, “Ungirthed”, the first track on which Megan first laid her crystalline vocals broke through and went viral on-line, eventually culminating into their full-length debut, Shrines.  The 11-track disc is sophisticated yet playful with an ever-so refreshing, albeit subtle, splash of hip-hop here and there. Creativity abounds throughout; Young Magic adds an altered dimension to “Grandloves”; and somewhere online exists a remixed version of “Belispeak” featuring of MC Danny Brown from Detroit.

This is how the musical landscape evolves over time – with younger (perhaps purer-hearted) generations reinterpreting soundscapes that have trickled through the annals of time and mixing them up with the latest ubiquitous computer software. Could this be the future of pop? We should certainly hope so.