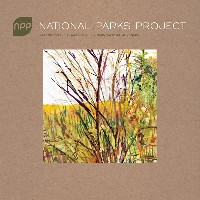 With 39 Canadian musicians recorded in 13 national parks across Canada you can start to imagine the breadth of sound that this album has. Amazingly, the 20 tracks flow together in the same way that Canada flows and changes as you drive from one coast to the other past crashing waves, through rolling hills, along rocky ridges, down curving roads and into smooth flowing fields. The evolving diversity truly makes this album what it is – unique.
The songs are snippets from soundtracks that were completed on expeditions consisting of three musicians and a filmmaker - a different crew for every province and territory. The 13 short films that came out of this artistic journey document a creative and cultural process shaped by the wilderness. I swear that you can almost tell where each track was recorded. The cold desolation in “Komatik Kowboys” (Andrew Whiteman on guitar and vocals) is unmistakably from Nunavut. With a Viking war horn (blown by Melissa Auf der Maur), “Mountaintops” reminds the listener of large boats coming to shore and must have been written in an eastern province, Newfoundland, in fact. Furthermore, it has an eerie atmosphere created by Melissa Auf der Maur on bass and pump organ, Sam Shalabi on oud and Jamie Fleming on guitar – a trio you might not usually expect a collaboration from but certainly a talented threesome.
If you expect a folksy and devotional tribute to Canada’s countryside in a Stompin’ Tom Connors style, you will be disappointed. Acoustic songs like “Welcome To The Dark” (with Old Man Luedecke’s rootsy banjo, Tony Dekker’s ringing alt-country voice, a little howl by Daniela Gesundheit) and “Wapusk” (with vocals by the Kathleen Edwards, slide guitar by Matt Mays) dot the album. Other songs show different interpretations of the country’s patchwork of landscape and culture. The song “Grotto,” for instance, is a relatively fast moving experimental number driven by off-kilter rhythms and beats. Saskatchewan’s piece, recorded in Prince Albert National Park, comes as a surprise with a glittering melody from the Rebecca Foon’s glockenspiel and Andre Ethier’s ukulele, a relaxed bass-line from the cello and Mathieu Charbonneau’s melodica drawling a slight allusion to a spaghetti-western near the end. Alberta’s piece is another divergence from the expected with Laura Barrett’s kalimba and seductive voice driving the song forward over the eclectic touches of Cadence Weapon’s programming and Mark Hamilton’s guitar.
The songs make an album that I’d describe with the same words I’d use to describe Canada: Beautiful, diverse, inspiring and one of a kind.