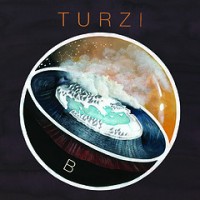 Turzi creates this absolutely terrifying halloween-esque music; it’s mostly instrumental commentary on the industrious and cruel side of civilazation that has become strapped to order and bound to fast progress. Certain moments of dark-psy-rock flow seamlessly into industrial-metal and out into more realms of electronic-fused heavy rock. Each song written for a city whose name starts with ‘B.’ No matter what city we’re exploring the tone is dark and malevolent.

B seems to provide a social commentary on human progress in various settings and with an astounding breadth of techniques. For instance, “Bethlehem” is a 60’s inspired psychedelic number that whips quickly into “Baltimore,” a much more modern electro track with swaggering arpeggiator lines. Then, in a heartbeat you’re taken into “Brasilia,” which has more trance elements than anything else on the album. As you can imagine, the styles at play are comparable to a number of artists from Freeland to Tangerine Dream. The commentary lies somewhere between that provided by bands like Atari Teenage Riot and KMFDM but with more on an emphasis on the instruments creating the themes. It’s definitely an interesting concept and the music is definitely done well although the album as a whole seems a little all over the map.