More By The Weather Station

All Of It Was Mine 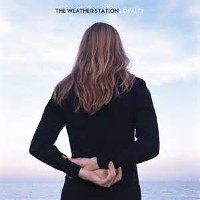 If the Canadian indie music gods (and what a sub-class of divinity they’d be!) had a list of songwriters whose words deserve to reverberate off the walls of a 19th century Paris drawing room Tamara Lindeman’s (aka The Weather Station) name would be near the top. The soft-spoken Canadian songstress has spent the last ten years recording thoughtful, beautiful music with a quiet grace that undercuts the postured and heavily produced antics of much of contemporary popular music. She has sturdy indie roots with her first recordings whispered into microphones in walk in closet and basements followed by an ongoing chorus role in the gospel inspired indie collective The Bruce Peninsula. But her poetic brevity, sharp eye, and gentle voice has garnered critical praise all her own and for her third studio album a Paris drawing room called.

After visiting the studio on another tour Lindeman and musical partner and friend Afie Jurvanan (aka Bahamas) returned to the legendary drawing room turned studio, La Frette, to record Loyalty. The contributions of Jurvanan adds a richness to the sound of the album without diminishing the intimacy that Lindeman is known for and the album remains unquestionably a Weather Station album. The tracks unravel with a deliberate and confidant hand drawing out poetic fragments that manage to put to mind the long, complicated plights and joys of the human condition into only a few stanzas. And while the words could stand alone as fine reading, combined with Lindeman’s melodies their stark beauty shines. Lindeman admits, “beauty is something that not everyone goes for these days” but nevertheless the album is soaked in it. “I hope it is beautiful if nothing else,” she offers. And it is. And that’s just the beginning.

Stand out tracks: Way It Is, Way It Could Be ;  Floodplain ; I Mined.