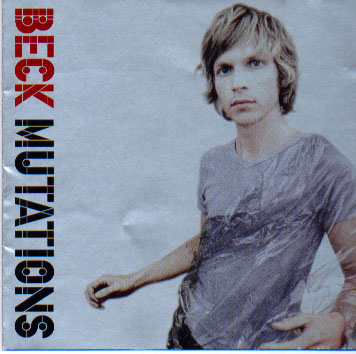 It would be way too easy to use the title of Beck's album to describe what he has done for his entire career. It would be even easier to use it to describe Beck Hansen himself. Unfortunately, it becomes hard to break out of Beck writer1s syndrome, identified by repeated use of "genre-hopping", "melding" and "skinny". That said, the skinny genre-hopper has melded together a diversity of sounds not heard since his last album. Well, not really. Mutations was described as just a collection of songs he wanted to sort of appear on shelves. The likelihood of his record company allowing this is still being calculated by monks in a remote European monastery, but regardless of the infinitesimal odds, the hype machine was actually turned down a notch for this album. It was made very clear this was not the follow up to Odelay!, and lucky for Beck. Exploring, at various times, sixties pop, country-esque ballads, sixties pop and sixties pop, if you didn1t know any better you1d think that Donovan was producing the album, and Bob Pollard was giving him vocal lessons. There are high points - "Tropicalia" with its cabana feel, and the bonus track (if for nothing else, the pleasure of hearing Beck go from 901s rock-out to spy movie theme via nature samples); unfortunately they are almost negated by the low points. While the sparseness of the almost all- acoustic arrangements is a welcome relief from the car wreck of sounds he usually throws at you, there is too much of the same and you find yourself wandering away to your CD collection looking for something else. Recommended tracks: Tropicalia, Static