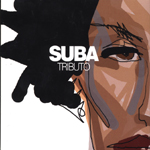 It's hard to imagine that a Serbian-born producer, immigrating to Brazil in the late 1980s on a UNESCO scholarship, could develop a taste and flair for the Brazilian rhythm and culture so quickly. But indeed Mitar Subotic (Suba) did.

With a solid European base in jazz and classical composition, Suba took to Afro-Brazilian forms quickly in Sao Paolo and forged ahead as one of Brazil's up and coming producers of the mid-to-late 90s. Having finished production work on Bebel Gilberto's highly regarded Tanto Tempo release and his first solo release Sao Paulo Confessions (both on Six Degrees), his first worldwide successes would have to be celebrated posthumously, as Suba passed away in an apartment fire at the tender age of 37 - three months before the release of his solo work.

With this history in mind, we come to the release at hand, Tributo. The album is different from other "remix" albums in an unfortunate, but at the same time eloquent way. After Suba's debut release, a few remixes were commissioned - specifically that of "Voce Gosta" and "Felicidade". These vinyl-only releases have been included on the new album. What is unfortunate is that the original recordings were lost in the very flames that took Suba's life. Therefore the rest of the tracks are either reinterpretations of Suba's amazing work, or live recordings of Suba himself.

Zirguiboom Records got together an impressive selection of "re-interpreters", mostly his closest compatriots and friends, to pay homage to Suba in song. The resulting album is a laid-back enjoyable listen, leaning to a more downtempo, Latin jazz feel. The compilation makes for a very moody soundscape with a distinct Brazilian flair for those summer afternoons on the patio, or equally as moving in a candlelit lounge, or beachfront with some caipariÃâÃÂ¤as.

This album is right at home with the likes of the TrÃâÃï¿½by Trio, Kruder & Dorfmeister, and Jazzanova, crossing borders between worldbeat, Latin jazz, and electronica. A worthy tribute to an artist who was on the verge of making a serious dent in modern music. His short legacy will hopefully live on with this album offering and the SUBA institute, formed in his memory.