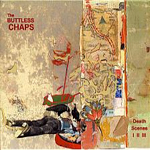 Tobacco-chewin' tunes for the lonely rambler in all of us. Showdown at the Circle K corral these nouvelle country dusters deliver the goods, with a bit of electric twang thrown in for good measure. The latest and greatest from Canada's favourite bare-assed barstool busters stampedes to a store near you in the unassuming form of an 11-track tribute to roadkill, the adorable fuzzy critters who never made it to the other side of that broken yellow line. A tender subject, but no cut is too rare for these calamitous cattlemen. Death Scenes I, II, III's alternate title might have been Let It Bleed.

Heartbreakingly simple songs, with plenty of banjo accompaniment, are the catalysts for many a romantic prairie reverie. The sweet smell of fresh-cut hay and the scarlet hues of a harvest sunset have been digitized here for your aural pleasure. One listen and you will find yourself transported to flavour country. The presence of Spanish trumpets evokes a Tex-Mex aesthetic, reminding us of bullfights, refried beans (aka. Mexican strawberries = always in season), and lazy, sunburnt siestas. Siesta time indeed, for despite their unsettling appellation, the exposed ones constitute a surprisingly mellow smoke, with 25% less tar than your new country music groups. Rather, they adhere to the Hank Snow, golden-oldie days of country predating Shania and the rest on her inbred, pop-fed kin.

Soft and slow, Dave Gowan's dreamy vocals will lull you into a state of repose faster than you can say "Rhinestone Cowboy." The gentle and contemplative songs on this album blend together until there is almost nothing left to distinguish them from one another. The biggest standout from the mass is "Six Strong Men," the title that answers the burning question: What will it take to get me into church?

Making excellent use of pianos, violins, clarinets, and, of course, euphonium, The Chaps create a wonderfully, warm ambiance that's guaranteed to put their audience at ease. Each tune seems so casual and off the cuff that it would be tempting to assume they were written in an absent minded flow of consciousness à la Wesley Willis. Yup, just hit the Country Demo button on the old Casio organ, sit back, sip some Southern Comfort and write some poop-kickin ditties about what you did or maybe just thought about doing that very day.

If you're a fan of vintage country music, or you just really enjoyed David Byrne's movie True Stories, be sure check these dudes out. The Buttless Chaps may not be the fastest guns in the West, but they sure do sit tall in the saddle.