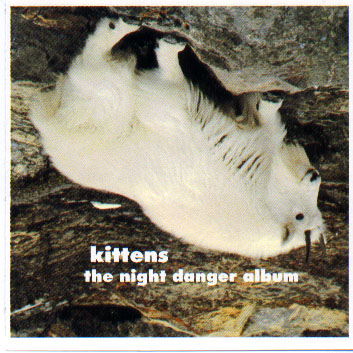 The fierce threesome from Winnipeg is back with The Night Danger Album, featuring cover art of an inverted mountain goat that reminds one of a shot from an old Viewmaster 3-D picture disc. This album reads like a true Melvins tribute, from the muffled bass and unintelligible lyrics right down to the song titles and the font they're printed in. Funnily enough, Kittens have been kind enough to provide the listener with the lyrics to same said songs, i.e. "Water moccasin, choke on the phone/Jeckyll man, /Jeckyll man, the blindfold of hope" taken from the recommended song "Moosejaw". All I can say to that is, "Like stee moanin' Ludlow" (see Melvins " Bullhead"). Still, definitely worth listening to, The Night Danger Album possesses all the Kittens' natural charm and (by now) signature ingredients. With six tracks recorded in only three days, this album retains a certain live performance energy with a touch of Oi and honky tonk thrown into the mix, most prevalent in the song "Honky Tonk Werewolf Song". I also recognize the more esoteric final track "Silent Night" which seems to have just been thrown in as filler and yet provides some audio relief with the mellow weirdness of a modern hyper-ballad. All too short, this album is a 6 oz. steak where a 10 oz would have satisfied. Kittens can also be heard on the recently released "Now We Are Five" Sonic Unyon artist compilation.