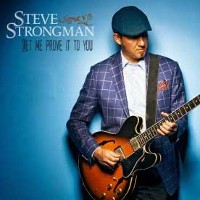 Let Me Prove It To You
Sonic Unyon ( http://www.sonicunyon.com/ @SonicUnyon )

I'm pretty sure that bluesman Steve Strongman didn't make a deal with the devil at some Hamilton crossroads, but he sure plays his guitar like he did.

On his latest release Let Me Prove It To You Strongman straps on his Gibson and shows us the electric blues is where he lives.  He has taken the blues and dropped it into the context of what could be anybody's everyday experiences.  That's Steve Strongman's gift.  His blues are blue-collar blues - work hard, play hard, make do, and live life.

Sandwiched between the infidelity sing along opener, "There's Something Goin' on", and the sweaty dance floor closer, "Can You Feel It?", are nine tracks that echo human nature.

"What I Believe" is a gritty and greasy sounding tune that holds no sway for ambiguity.  Steve lays flat out what he believes and he believes in playing the blues.

Storytelling is a Strongman forte and it's front and centre with "We're Goin' Out Tonight".  The song is completely relatable and the format is reminiscent of George Thorogood's "One Bourbon, One Scotch, One Beer".

Strongman is backed by an energetic and tight group of musicians.  He is able to cut loose with special guest Guy Belanger, Quebec's virtuoso harmonica player, on "Lookin' For Trouble".  The song grabs you right from the fade in and keeps up the pace the whole way through.

Let Me Prove It Too You is produced by Juno award winning producer Rob Szabo who produced Strongman's breakout acoustic album A Natural Fact.  A musician himself, Szabo appears to understand where Steve Strongman is coming from, where he is going, and how to channel the talents of the Hamilton bluesman.  The results are a wholly believable recording.  There are no slick tricks to be found here.

Steve Strongman invites you into the blues with exceptional musicianship, superb song crafting, and a very personable delivery.  So much so that you'll want to sing, drink and dance through the whole album.