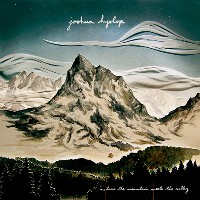 Singer-songwriter Joshua Hyslop has released his debut full length album, Where the Mountain Meets the Valley. He had to live through swooping highs and devastating lows first, before digging deep to write.  It was worth waiting for.

Joshua Hyslop has a warm and gentle voice that draws you in. After listening to his EP A Cold Wind, I wondered if a full length album would be a real yawner with the same soft tones all the way through.  Surprisingly, that’s not the case.  Joshua really does demonstrate the different textures in his voice. “What Have I Done?” and “Shelter From the Storm” are nice examples of this. He obviously knows how to enhance his vocal qualities with the instrumentation. Guitars, mandolin, cello, violin, banjo, keys and percussion all nestle his voice like a choir and give punctuation where it’s warranted.

However, it’s the first song that is worth the price of the album. “Do Not Let Me Go” is a song that is full of beauty and pain.  What goes through a man’s head when he thinks he’s going to die?  What becomes real?  Joshua Hyslop has plucked those very experiences from his life and given us an intimate glimpse.  Which leads me to say with certainty; you just can’t fake the emotions that are contained within the songs on the album. I fell into the story of his songs and so will others.   Joshua Hyslop has got to be one of the most genuine songwriters I’ve heard in a long while.

The second track “Hallelujah” was a bit of a gutsy move in that Hallelujah is a song that has been completely equated with Leonard Cohen or Jeff Buckley.  It’s in our aural conditioning.  There is no mistaking however that this is Joshua’s song when he sings the words.  It’s his story.  To me that is what a good artist can do.  I completely forgot the conditioning of the other and discovered there are different kinds of Hallelujah’s.

This well produced album is a songwriter’s album and you just can’t rush through it.  The highs and lows of Where the Mountain Meets the Valley, really is where Joshua Hyslop lives.