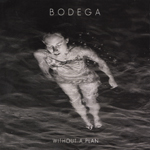 Without A Plan
Brobdingnagian ( )

Andrew Rodriguez continues to solidify his stature in the upper echelon of Canadian songwriters with the followup to the Juno-nominated Bring Yourself Up. Without A Plan was recorded with a cast of characters including Paul Aucoin, Sam Goldberg, Kim Temple, Kurt Swinghammer, Elliot Sairan, Howie Beck, and Dave Fridmann. Collaborating with Fridmann (Mercury Rev, Flaming Lips) on production, Rodriguez manages to merge the whole pop and rock thing together without taking the soul or the meat away from the recording. When Rodriguez belts out "It's in the way you're breaking my heart/Over and over again for a start," there's a Bob Dylan or Neil Young quality that comes out. He has the ability to give you cheesy or clichÃâÃ¢â¬Å¡d lines but somehow convey them with substance. Musically, the record is just as polished. With a vast collection of non-conventional rock instruments, the layers of the disc are not quite as appreciated as they are when you listen through your headphones. The extra body produced by the use of mellotron, vibraphone, theremin, and melodica creates a hypnotic state on tracks like "Finer Than Fine Print", and "Are You Still There?" giving the record that extra push. RECOMMENDED TRACKS: "Twisted Slopes", "Up In Smoke, Out In Tears", "Don't Have A Clue" - Matt Holmes, CIOI Radio, Hamilton, ON