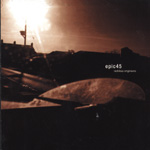 Reckless Engineers
Where Are My ( )

Epic45's debut, Reckless Engineers, is a truly remarkable achievement. Together since high school, this British group is stunningly successful in blending their influences into a coherent whole. Largely instrumental, Epic45 echo esoteric mainstays: Papa M (before he started singing) and Rachel's. On the two tracks that feature vocals ("Like A Crowbar, Humour Separated Us" and "Shorebound"), the group's love of early 90's guitar bands such as My Bloody Valentine and Slowdive is apparent. However, this is not mere emulation. The members of Epic45 have, at the age of twenty years old, perfected the art of synthesis. In a world where few things are truly original, their songs manage to be captivating, creative, and sonically pleasing. The album opener, "Do Nothing Until You Hear From Me," begins with the sound of rainfall, setting the ambience for the journey on which the listener is about to embark. A lone guitar repeatedly plucks a haunting melody before the band unexpectedly joins in. The music hums and throbs, building to a climax less orchestral than those of Montréal chamber-rockers Godspeed You Black Emperor!, and yet, similar in tone. The next track, "A Song For The Seasons," is a Papa M-esque soundscape saturated with digital gadgetry. The result is lovely. No less beautiful is the broodingly languid "Remote Canals" which builds slowly on a treated three-note progression. "For Painters of Scenery" is reminiscent of what one would hear on a DJ Shadow record, only the sounds are produced organically, making it all the more worthy of attention. However, Epic45 is not only a band that deserves attention...they demand it. Passively listening to Reckless Engineers will not do the album justice; rather, it is only after repeated listens that the young group's full potential is realized. Judging by the quality of this debut full-length, Epic45 appear to hold the tools needed to continue creating their unique brand of emotional and challenging music. RECOMMENDED TRACKS: "A Song For The Seasons" "Do Nothing Until You Hear From Me" - Ryan Wugalter, CFUR Radio, Prince George, BC