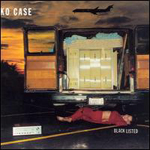 Blacklisted is Neko Case's third full-length and comes on the heels of an extensive tour with the initial-sharing Nick Cave. It's immediately apparent that some of the Dark One's penchant for Southern Gothic imagery has rubbed off. Gone are much of the traditional country-isms of Furnace Room Lullaby, replaced instead with subtle, crackly instrumentation and vocals that could've been recorded in a rural Georgia mausoleum. Part of the departure in style can be attributed to the company she keeps on Blacklisted (including Mary Margaret O'Hara, Calexico's John Convertino and Joey Burns, and Giant Sand's Howe Gelb), but the lion's share comes from Case's growing confidence as a songwriter. The bulk of this album was self-penned, and even the two covers ("Look For Me (I'll Be Around)" and "Runnin' Out Of Fools") come across heavy on torch and light on twang. As always though, it's Case's voice that puts this disc in a class of its own. It's as rich and enveloping as a river of butterscotch, yet contains just a trace of malice. When she proclaims "The hammer clicks in place, the world's gonna pay/Right down in the face of God and his saint," on "Things That Scare Me," it feels like ragged fingernails digging into your wrists' soft flesh. Southern Gothic, indeed. RECOMMENDED TRACKS: "Things That Scare Me", "Lady Pilot", "Runnin' Out Of Fools"