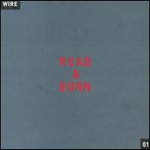 Rock reunions are a mixed blessing at best, and seem to be most effective when the group in question splits up before they've realized their full potential; before they've worn out their welcome. The critical acclaim of the recent Mission of Burma and Soft Boys tours underscores this point - as does the ongoing miasma of The Who's latest casualty-ridden money grab. When it was announced that UK postpunks Wire were to reunite for a one-off show in early 2000, nobody was sure which side of the fence they'd land on. After all, with their first two albums - 1977's Pink Flag and 78's Chairs Missing - Wire helped to define the angular guitar attack that became the template for groups like Fugazi and Shellac. Rather than burning out and leaving a stark corpse, though, Wire embarked on an increasingly esoteric career through the eighties that saw them relying more and more on electronics and studio trickery. More art school and less punk, so to speak. Within minutes of the opening guitar salvo, it was apparent which era Wire had chosen to hearken back to, playing with a ferocity not seen since the late seventies. Re-energized, that show led to an ensuing string of live dates both in the UK and overseas, and provided the inspiration to return to the studio to work on a series of new recordings. Released as an ongoing series of six EPs, Read & Burn, if anything, sounds even more volatile than their late-seventies output. The guitars are sharp enough to bore through sheet metal and almost completely envelop the staccato drumming and drill sergeant vocals. The piledriver aesthetic is at its most jarring on cuts like "Comet" and "Raft Ants," where the sheer directness of the music takes on an almost industrial quality, comparable to the two-album period in Ministry's career immediately before Al Jourgensen began drifting into G n' R-styled self-parody. While reference points throughout the first two installments of Read & Burn point to the quartet's first two releases, it's clear that Wire is still a band intent on exploring new territory, and they prove they still have the chops to make it teeth-rattlingly exciting. RECOMMENDED TRACKS: "Comet", "The Agfers of Kodack", "Spent"