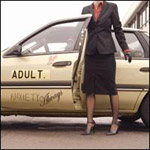 If you have heard the music of ADULT. you probably already have become obsessed with their catchy melodies, quirky vocals and strangely appealing beats, blips, clicks and loops. For a band with such a mature name, ADULT. surprisingly brings forth a youthful Kraftwerk-Gary Newman-esque childish and fun approach to the underground electro-pop scene. This duo from Detroit consists of Nicola Kuperus (a photographer) and her husband Adam Lee Miller (a painter). They formed the project in 1997 and quickly became known in the underground electronic scene. Who didn't see that one coming? Their perfect arpeggios, dancey beats and android inspired light-hearted love songs are so appealing that they would capture even the most relectant of listeners. They have released numerous singles and their first proper full length "resuscitation" became available in 2001 on their label "Ersatz Audio". This release brought ADULT. a much larger audience as they now began to appealed to both fans of Detroit Techno and Indie rockers alike. Their newest release "Anxiety Always" features a dirtier, crunchier approach. These songs are more raw and direct. You still hear the robot-vocals of Kuperus and Miller backing her up with the voc-order but these songs seem more heavy and intense. More full and lush in sound. These analogue synth melodies twist, grind, sooth and space you out all at the same time while your feet began pounding aching for the opportunity to dance, dance and dance! . Highlights of this album for me are "glue your eyelids together" and "Turn your back", these songs will stay in head forever.and they are weird, I mean really weird. The track "people you can confuse" feels like you're stuck inside the scariest video game ever. This album is as intense as it is fun making it a definite must for every listener.