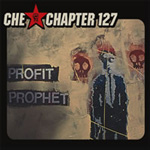 After a cursory peruse through Che Chapter 127's politics, boy, do I now feel like shit for working at a pharmaceutical company. Actually, that's a lie. I know about all the supposed "evils" my employer commits - I've been a leftist activist since my days in high school. And listening to Profit Prophet reminds me of when I wore a beret specifically because Che Guevara did, and of afternoons in the student lounge when I'd try to convince fellow students at my private high school that "imperialism" directly affected us, or "political indoctrination" was the reason everyone thought western democracy/capitalism was inherently beneficial. Those were fun, albiet naive sessions. Anyway, that's the essence of Che Chapter 127: heavy-duty revolutionary rhetoric mired in Boysetsfire-esque hardcore. Abrasive and raw, Profit Prophet is also a record that is decidedly double-edged. On one hand, you've got loud guitars over odd time signature drum fills, yet contrary to the whole process you're faced with vocalist Meegan Riot's almost silky delivery which is highly reminiscent of Debbie Harry or the vocals of a hypothetically non-cigarette affected Courtney Love. Dichotomous extremes aside, after the initial disjuncture between the two fades, what's left is a pretty good, if eventually monotonous, album. Aggressive ("Unlearning"), borderline unnerving ("Kill The Ones Who Question") and decidedly metalized ("Conquistadoras"), Che is definitely not the speedy punk I expected, especially given the fact that this release is on G7 Welcoming Committee. However, the inherent danger of preachy, political bands (like preachy, political high school students) is that eventually the message gets lost in the repetitive "the system is 100% bad" overdrive of it all. Che can't be faulted for the sentiment, but the means (from packaging, to lyrics, to "suggested reading") go overboard. Kids, the revolution starts with you. Just make sure you realise the revolution is part of a greater whole. RECOMMENDED TRACKS: "Unlearning", "Kill The Ones Who Question", "Conquistadoras"