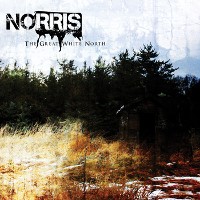 The Great White North
Year Of The Sun ( )

It’s not easy breathing new life into a stale genre like metalcore and no one, I mean NO ONE, has put out something as catchy and punishing as Thunder Bay’s Norris in a long time. The Great White North is Norris’s third release overall and it’s a huge jump forward in song writing for the band. Obviously, the band has found its confidence and mojo, when it comes to creating songs. ‘The Great White North’ kicks things off and really sets the tone for the album: razor sharp guitars, angry, throat ripping vocals, thought provoking lyrics, heavy, catchy rhythms and tasteful, talented playing. It would be easy for the guitarists to play overly showy solos or riffs on the album but both of them keep the song in mind and nothing is played outside of what works for the whole.  The drums are played and written like a singer would write his parts: heavy and showy but with an incredible sense of melody which I’m sure gives the bassist sore fingers just thinking about. Not only does the bass do an admirable job in keeping up with the drums, it forms its own melody lines as well. Norris pay a lot of attention to making sure their music is bouncy and melodic without compromising the heaviness of what they are playing. It’s a difficult line that many of today’s popular bands still haven’t figured out, but Norris have it locked down. Don’t get me wrong, this isn’t poppy love music, this is anger and hatred you can bounce to. Sequencing wise, The Great White North moves along at a rapid pace with the exception of the sombre piano track ‘Peasant’ which serves as an excellent centre piece as well as making you think it’s time to get up and flip the record over to side two.

Hats off to the band as well, who produced the album themselves, for the sound of quality. The Great White North sounds as warm and natural as an analog recording from the 1970’s, none of the cold, sterile, completely over blown production that has marred many releases in the last 10 years. Norris know that being heavy and having great songs doesn’t mean completely eschewing melody and they give you all three in spades.