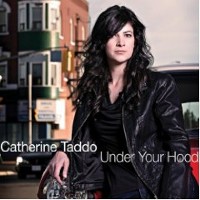 Under Your Hood
Pyrrha ( )

Apparently Catherine Taddo is a latecomer to the blues, but listening to Under Your Hood, there is no indication that this is the case. With 9 originals and one relatively obscure cover (Louis Jordan’s ‘Men Are Like Streetcars’) Taddo has definitely set out to make her mark in the Canadian Blues world. That being said, Under Your Hood also dips into a little bit of funk (‘Under Your Hood’) and rockabilly (‘Waiting For You’) that is sure to make the blues die hard a little uncomfortable, but is going to delight fans of danceable, upbeat blues influenced music. The production throughout the album is very clean which really brings out Taddo’s commanding, silky, sexy voice while allowing the lead guitar of Rusty McCarthy a lot of room to breathe. The backbeat provided by Ed Young (drums) and Frank Deresti (bass) is absolutely solid, and while a little workman-like (and there is nothing wrong with that), they both shine on the aforementioned ‘Under Your Hood’. Deresti’s funk runs definitely add to the hip-swaying, toe tapping feel of the song, pushing the enjoy-ability of it up a few notches. Overall, Under Your Hood has a very open and airy feel to it. It’s easy to imagine these songs being played live and at times hard to not dance while listening to them. The easy, powerful flow of Taddo’s voice mixed with the slick musicianship almost compels the body to sway, tap and move along.
Catherine Taddo has created an excellent modern blues (NOT blues-rock) album and Under Your Hood is sure to be a favourite with both types of people: those who get the blues and those who don’t.