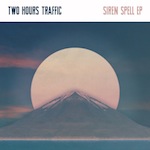 Since 2009’s Territory, Two Hours Traffic have ventured into new terrain: The Charlottetown, PEI-based four-piece have parted ways with longtime producer Joel Plaskett and teamed up with Darryl Neudorf (Neko Case, The Sadies, The New Pornographers) on their latest effort, Siren Spell. The four-song EP also marks the departure of guitarist Alec O’Hanley and the introduction of bassist Nathan Gill, with Andrew MacDonald taking over on guitar.
Tugging at the heart—and guitar—strings with their romantically-charged lyrics and self-described “pop ‘n’ roll” sounds, Two Hours Traffic earnestly explore love’s varied shades on Siren Spell. With a guitar riff reminiscent of Cyndi Lauper’s “Girls Just Want To Have Fun,” peppy opener “Amour Than Amis” captures a similarly eager and youthful spirit, albeit with the humbling realization of unrequited love. “Audrey” takes on a more confident tone, with stomping rhythms and a self-assured chorus that proclaims, “I’ve got love to give.” “Feel Alright” channels a comparable vigor with propelling guitars and an increasingly commanding chorus that asks, “Why don’t I take you out and make you feel alright?” Winding down with acoustic closer “I Did What I Could,” Siren Spell charms with its sincerity in expressing matters of the heart.
A full-length album is set to arrive in early 2013.