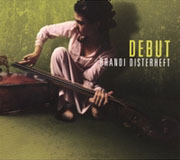 Bassist Brandi Disterheft's debut CD, cleverly titled Debut is a pleasant surprise in a number of ways. She could easily have got away with a light but safe collection of standards featuring her bass, but instead she composed all nine songs including two with lyrics. This collection of originals ranges from the swinging "Sixty Dollar Train" to the New Orleans funeral feel of "Duke's Dead." On the latter she starts by bowing the acoustic bass and progresses to the horn section's funeral dirge. No it's not about Duke Ellington. She explained that when she was a child she used to walk to school with a little boy called Duke. One day due to a schedule change they couldn't walk together and that afternoon Duke was killed by a bus. This is her way of remembering. There is a similar sound and feel to "Typhoon the 27th Hour". Of the vocal tracks, "Auto Beauties" and "If Only ...", both are ably rendered by Sophia Perlman and "Auto Beauties" has a cabaretish/Kurt Weill feel to it. Disterheft struts here stuff throughout the CD and really tears it up on "Dah Knee Low" with a fine solo. The musicians she assembled seem to have an affinity for her music and the drumming of Sly Juhas anchors the solid horn section of Chris Gale on sax and Alexander Brown on trumpet. Both David Virelles and Adrean Farrugia on piano are featured throughout the CD and guitarist Nathan Hiltz may be one of the best kept secrets in the Canadian jazz scene today. For one under the age of 25, Brandi Disterhelf shows a maturity in both her musicanship and compostion which belies her years. Debut is a wonderful surprise for the summer of '07.