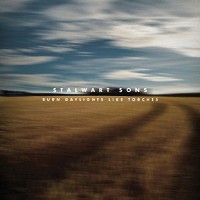 Stalwart Sons is a post-hardcore trio from Calgary, Alberta. Their style is shockingly diverse, and has its roots in folk and jazz as much as punk or hardcore. The guitar is often slightly overdriven, and focuses more on creative chord progressions than shredding riffs. Burn Daylights Like Torches is a rhythmically complex album, with sporadic time signature changes and syncopated fills. The bass is melodic and aggressive, successfully denying the conventional urge for a second guitarist. The band’s diversity comes largely from its use of drums, which smoothly shift between upbeat post-hardcore and softer folk-rock beats.

The lyrics on Burn Daylights Like Torches address Canadian identity, and are full of references to pastoral imagery. The introductory track “Let Me Run” starts off by saying: ‘I can’t make it through snow so deep/ I make angels when I fall’. The last song, “Fire Burning”, ends the album in saying: ‘So dig a frozen ground/ as time runs itself out’. Stalwart Sons are quite suitable for listening during the winter, and seem to epitomize Calgary in a manner comparable to The Weakerthans and Winnipeg. Burn Daylights Like Torches is an excellent album which draws similarities to bands across the spectrum of punk and rock, such as Fugazi and The Constantines. This band is one of the most promising acts in the Canadian post-hardcore scene, and should hopefully release more awesome music in years to come.