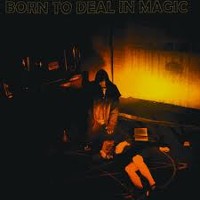 Hailing from Saskatoon, Saskatchewan, Shooting Guns are a doom-rock quintet with progressive and psychedelic leanings. After an initial 7” release, this is the band's first full-length album. Their sound focuses around guitarist Keith Doepker and his Black Sabbath style metal riffs. Keyboardist Steve Reed adds to the sounds with layered analogue synthesizer, balanced with Chris Laramee's effects-soaked guitar leads. The band's rhythm section is made up of drummer Jim Ginther and bassist Jay Loos, who structure the outfit's minimalist compositions around slowly shifting grooves.

Born To Deal In Magic: 1952-1976 is a diverse and impressive release that can appeal to listeners across hardcore and indie-rock communities. Though Shooting Guns are an instrumental band, their textured melodies dynamically speak to the listener throughout the forty minute experience. Quiet delay and hiss escalate to monstrous levels, which then becomes a psychedelic metal breakdown with sludgy rhythmic fills. Despite its abrasive and experimental tendencies, Born To Deal In Magic: 1952-1976 manages to explore a variety of influences and styles that is certain to attract audiences around the globe.