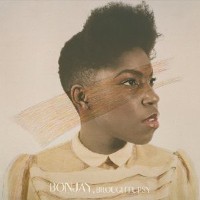 Bonjay are an electronic duo originally from Ottawa, who have been based in Toronto for the past few years. Their simple setup includes Alanna Stuart as vocalist, and Ian “Pho” Swain as producer. Broughtupsy is their third release, with six tracks timing at about twenty minutes in length. Their style is original and contagious in its combination of dancehall R&B with indie-electro. Stuart has a strong soulful voice, which employs a wide range of melodic influences from her West-Indian roots to hip-hop/club hooks.
Broughtupsy begins with “Stumble”, which emphasizes the diversity of Stuart’s vocals and Swain’s catchy electro-rap production. The second song, “Shotta”, displays Stuart’s powerful female presence in through the chorus: “Some call him a shotta, some call him a gangsta, you think he’s a hustla, but they know his nature”. In the next track “Frawdulent”, Stuart’s voice transforms to an upbeat rap reminiscent of M.I.A. with a retro-soul refrain. Other highlights include the layered polyrhythmic beats of “Want a Gang”, which provides the album’s climactic point with their longest and most dynamic song (at 4:37 in length). Overall, Broughtupsy is a great E.P. which will surely boost Bonjay in popularity and leave their fans awaiting a full-length.