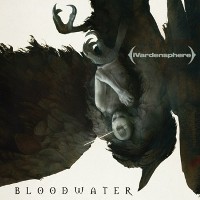 Admittedly it’s been a long time since I’ve delved into the ‘industrial’ scene outside of the bands I’ve known for years and, it seems things have changed a little since I was listening in the 90’s. If you’re looking for the distorted vocal sounds and loud, trashed guitars of Ministry on the iVardensphere album you’re going to be sadly disappointed. In fact, the band doesn’t sound much like most of my touchstone industrial bands except for (in certain moments) Skinny Puppy. For the most part iVardensphere keep the distortion to a minimum, only using it in conjunction with other sounds to make an odd melody. Bloodwater uses primal, tribal rhythms as the basis for its songs and uses a wall of keyboards, synthesizers and movie samples to build these disparate sounds into songs with amazingly complex structure. Don’t let that fool you though, the songs are not only accessible to the uninitiated, they’re catchy as well. “Nautilus Pt. 1” serves as a mellow, fitting introduction to the album, bracing you for what comes next, which is the clean, heavy beats of ‘Ancients’, which gives way to the movie sample intro of ‘Sick’ which brings the beat up a notch and also introduces some more distortion and those disparate sounds I was talking about earlier. As an instrumental band, iVardensphere don’t have to worry about the limitations being imposed by a vocalist and they exploit that advantage to its fullest. This really is music for people who like to dance but can’t stand anything that has even a smattering of pop to it. It’s also great driving home after work music and...I can’t help but visualize ninjas with glow in the dark weapons fighting in the dark with Bloodwater as the soundtrack. Take that for what you will, but I definitely recommend the album!