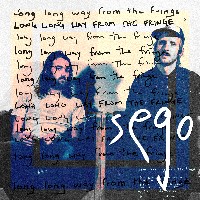 Long Long Way from the Fringe, is a high-energy title referring to the title track about a party that hit its peak just before you discovered how cool it was. Perhaps it is a reference to the fact that LCD Soundsystem had been making music like this for a decade prior and had already broken up by time this duo began. Sego's seven song release on Dine Alone Records comes free of any production credits, so it could be completely possible that this is a project of James Murphy himself --except that it isn’t. The group is made up of Spencer Peterson and Thomas Carroll who relocated from their small town beginnings in Utah to a warehouse in Los Angeles.

The debut Sego release, Wicket Youth, contained some catchy and interesting experimentation in the beats, sounds, and song structures. On this release, there’s a lot more pop-orientation in those aspects, but it maintains an overall more upbeat mood with tracks, like “The Fringe,” “Mickey Macali,” and “Psychobabble.” Despite there being obvious references to the aforementioned LCD Soundsystem and somewhat also to Death From Above 1979, who they’re often compared to, there are also many parallels to Simian, Hot Chip and fellow small-town American partier, Har Mar Superstar. While bringing little innovation to the selection of dance rock groups, there’s little to complain about on this album. Most songs are in and out in under 3 to 4 minutes, hitting straight to the bone of the party and moving on to the next peppy bit of synths and drums. The often-shouted melodic vocals make for great singalongs, and the two short instrumental interludes include an acid instrumental and a noisy ambient synth drone. With the impending LCD Soundsystem reunion, there may be a refreshed desire for Sego-styled party-music that should be quenched with the upcoming full-length that Long Long Way from the Fringe hints towards.