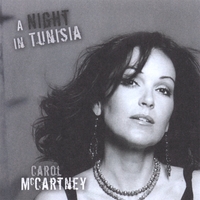 I first heard Carol McCartney sing on a track on ob Brough's CD A Decade of Favorites. I quickly replayed the song. Now she has released her own CD. Carol McCartney has chosen a mix of jazz/swing/show standards, along with an obscure pop tune for her first solo CD titled A Night in Tunisia. She has included a good mix of ballads, blues and up tempo tracks. The mix allows her to show her versatility as a vocalist. She apparently can sing at any tempo and her phrasing is beautiful. These talents shine through on the Latiny version of "No More Blues" and the 'coda' "Ev'ry Time We Say Goodbye". She has previously appeared on a couple of saxophonist/composer Bob Brough's CDs and has toured frequently with big bands. For this CD she has included Brough and many talented veterans of the Toronto/Montreal jazz scene including guest appearances by the legendary vibes player Peter Appleyard and horn god Guido Basso. An average vocalist could sound good with the band she has assembled, but McCartney takes risks and her vocal prowess shines through in "Dat Dere", where she sings with only the backing of the great Dave Young's bass. The same can be said for "You Don't Know What Love Is" where, for the most part, she is paired with only Geoff Young's wonderful guitar. Many young vocalists (and too many comedians) attempt to skat and very few pull it off. After listening to Ella Fitzgerald, maybe they might listen to Carol McCartney skatting on the tracks A Night In Tunisia and "Jersey Bounce". Then they might get the idea. This is a very good mainstream jazz CD featuring outstanding musicans and classic vocals.