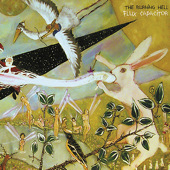 The Burning Hell is the alter-ego of songwriter Mathias Kom, currently based in St. John’s, Newfoundland.  Flux Capacitator is his fifth full-length album,  amongst several other digital, tape, and split releases.  Although Kom is only featured as playing guitar and ukulele (in addition to lead vocals), the album features a handful of other musicians contributing a variety of instruments.  Most tracks contain complex polyphonic melodies, implementing mandolin, saxophone, flute, clarinet, violin, organ, trombone, and much more.

Flux Capacitator starts off with “My Name Is Mathias” which provides an introduction to his lyrical personality, as well as his Jewish background and Klezmer style.  The second song, “Nostalgia”, is one of the most standout tracks due to the upbeat layered horns and strings.  The lyrics are both witty and emotional in their referencing of Kom’s favourite memories of the 1980’s.  “Bedtime Stories”  has a similar danceable feel, and is a song denouncing the myth of childhood innocence while sympathizing with narrative villains.  One of the most structured pop tracks on the album is “Let Things Slip Away”, which includes an astounding saxophone line and guitar solo. Kom then goes on to discuss topics such as aging, pet euthanasia, and pirates.  There is also a cover of Construction & Destruction’s “One Works Days, One Works Nights”, who is mentioned as “Canada’s best band” in the CD’s liner notes. At only 36 minutes in length, Flux Capacitator  is an album rich with diverse sounds and emotions.