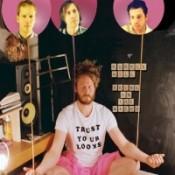 Bring On The Macho
Escapegoat ( )

Not having the opportunity to listen to the first three albums of Purple Hill didn't provide any pre conceptions of the band. But from the first two tracks of "That Northern Light", and "All He Ever Wanted Was To Be A Man" gave me chills as the vocals, arrangement and lyrics remind me of early Dire Straits. Then came the third track with a quick little ditty of "Mid Life Crisis" that had hint of rockabilly.

The majority of the album is very basic pop-punk with a hint of Southern rock with some of the tracks running into different areas by working in acoustic guitars, keyboards on a couple of instrumental portions. "Rock 'n' Roll Short Men" is a great example of the nonsense, struggle and stupidity of being a nowhere rock star on this slower track that is sung in an odd falsetto adding to the strange diverse path Purple Hill can take.

However, aside from some of the musical deviations, this is a real decent album with guitar led pop-punk with a big heart that will most certainly put a smile on your face