The Fate Of The World Depends On This Kiss 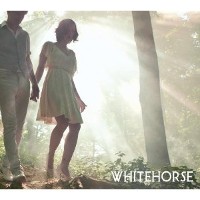 The debut album of Whitehorse is the musical marriage of the husband and wife duo of Melissa McClelland and Luke Doucet. Both well recognized in the musical community with awards and nominations from the Juno Awards, the Canadian Folk Music Awards, Hamilton Music Awards, Independent Music Awards and the Polaris Prize.

The 8-track teaser certainly leaves the listener begging for more after enjoying a 25 minute musical appetizer. Whitehorse is a bold debut mixed with roots rockers like “Emerald Isle”, “Broken” or the country blend of I’m On Fire” that will have you singing along before the end of the song. Before to long you will be clapping and stomping your feet with the thumping drum track on “Killing Time Is Murder.”

The two outer layers of the album sandwich with “Eulogy for Whiskers, Part 1&2” with the voices of this dynamic duo float in and out during a rolling sea of instrumental accompaniment.

Even though this is their first album together it certainly does not sound like a group’s first recorded endeavour. Their well honed solo musical careers blend together like a perfect chemistry mixture.